Captain Tibbals, a wealthy, retired seaman who wore a lot of hats in Port Townsend, invested $28,000 to build this grand three story, Victorian Richardson Romanesque style brick building, constructed to last. The construction began in 1887, and opened as billiard parlor and Townsend Tavern, in 1889, with rooms for rent on the 2nd and 3rd floor. There was one bathroom for each floor. Captain Tibbals and his family lived on the second floor.

Because of it’s winning combination of having a solidly built handsome building, that was located in a prime downtown spot, many businesses, legal and one known illegal, made their home here. Eventually, the first floor space was carved into several business spaces to rent to “specialty retailers.” The Call Newspaper moved into one of them during the early 1900s. Over the years, the first floor businesses included The Egyptian Theater, the Northern Pacific offices, a grocery store, a state liquor store, a florist shop, and several restaurants.

During Prohibition through the middle of the Depression, an upfront, well-known brothel and hotel opened up on the second and third floors, earning the nickname, “The Palace of Sweets.” The Madame, of the Palace of Sweets was Marie, who had lovely corner suite on the second floor, that included a fireplace that was the only one in the building. Her room was “richly decorated,” had “plush red wallpaper with deep green woodwork”.

In 1935, the authorities tried to close down the Palace of Sweets with a raid, but other observations by a secretary, whose office was at the end of the 2nd hall floor, suggests that the brothel continued at least until 1940/1941, when World War 2 started. As late as 1940, a bunch of young women were seen by this secretary every day at noon, waiting for the second floor bathroom in their bathrobes, which suggests that the brothel may have still been running, but more underground than before.

Or, it could be that single young women rented rooms here because they worked for other businesses in town. Though, it is fishy that they all gathered together to use the bathroom at noon, suggesting that they all got off work at the same time, which was probably late evening, early morning; the working hours of a prostitute.

Being well-known as a brothel for at least ten years, operations would have to be very carefully planned, to avoid detection by the authorities, who may have been willing to look the other way if the brothel was discreet and subtle. By WWII, however, the brothel would’ve been closed down completely. At the beginning of World War 2, all brothels were ordered closed by the federal government, to help the war effort.During the 1940s, a regular boarding house/office building came into being, that rented their rooms and main floor to businesses, and to individuals as well. Thirty years later, it was a different story though.

By 1970, the building was a real fixer-upper opportunity. The upper floors were no longer very usable, which meant that the income generated by the businesses on the first floor had to cover the upkeep and expenses for the whole building. The Captain Tibbals Building was sorely in need of a boatload of money for restoration and renovation if it was to become a financially successful building once more.

As The Captain Tibbals building had long been a well-loved icon in Port Townsend, money was successfully raised to finance a “long and tedious restoration” that was started in 1976. This immense restoration and renovation project included renovating and restoring the guest rooms to closely resemble their memorable past in the Victorian Era and the Roaring Twenties.

Once again, this glorious building was able to use all of its space to create income for the owners, adding a star to historic Port Townsend’s downtown section. Not only the people from the area and visitors were happy, but also entities that loved the Palace Hotel, or had a strong connection to this place were also very pleased! 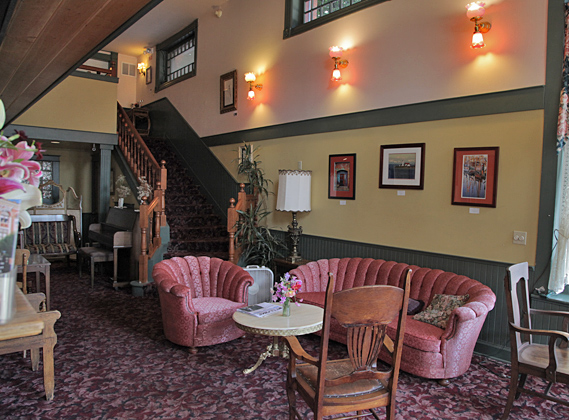 Staff, visitors, and guests have been treated to the following paranormal experiences: Having “encounters” with solid, life-like female entities dressed in Victorian gowns. Having the experience of being touched by unseen hands that brush past them as they walk down the hallways of the hotel. Orbs that are not insects or dust have been captured on film and digital photography and cameras in several places in the hotel. Known Entities: Entities of Captain Tibbals, Adam, former housekeeper, homeless man, Father Patrick, Claire, Katherine and Betty.

The Female Entity – Known as: The Woman in a Blue Dress; (Some think that her name is Claire or Katherine.) Since the 1960s, “The Woman in the Blue Dress” is often seen at top of stairs on the 2nd floor level. This entity has been seen leaving her portrait that hangs on the wall on the second floor, at the top of the staircase. Her favorite room is Room 4, and she has fun teasing the living at times.

In the hotel’s “Ghost Files”, an incident was reported and noted. Guests who were spending the night in Room 4 were startled when the door suddenly “bolted open.” They didn’t disappoint her, and gave the spirit some chuckles as they dashed down to the night manager and reported her behavior promptly.

Other guests have reported dreaming about the Lady in Blue, who likes to appear in people’s dreams. People sleeping in room 3 or 4 are awakened by strange noises, and have heard a cry or a groan. Other guests have noticed an aroma of perfume. Other guests have felt a cold draft from the hall. They hear a knocking on the door but when they opened the door, no one is there. One guest claims to have been touched by her.

The Entity of Captain Tibbals. Described as being a benign, happy male presence who likes to stay in this area, where he can observe all the activity, and remember his fond memories.

Female Entity in Room 9: Perhaps a former tenant, or one of “the girls.” She makes her presence known at times, but no details are given in my sources. I bet some details are in the hotel’s “Ghost Files.”

Room 3: A female presence; Perhaps this could be Mrs. Tibbals, some former tenant, or another one of “the girls.” This female entity likes to stand near the stove, as she has been seen and felt there.

Entity of Betty, thought to be a prostitute. She talked to some investigators through a “talking board,” and told them her name was Betty and that she was 39 years old.

Entity of a little boy; Perhaps a child of Captain Tibbals, or of a former tenant, or one of the prostitutes’ babies born here that survived a few years. This friendly little boy, around six to eight years old, told the manager/housekeeper, Cheryl Heller, that his name was Adam. Adam asked psychic medium Robin where his mother was. His apparition has been seen throughout the third floor.

Shadow of a person has been seen going down the hallway.

A place where the joint was jumpin’. Entity of Man: Identified as a homeless man who used to sleep here. Described as a mellow soul, pleased to be able to continue to stay in his favorite place in this world. Seen by staff member, Susan Euro, who was putting away the Palace Hotel Christmas decorations. She saw the solid back of a male, described as being bald, wearing a plaid shirt, sitting at the basement work bench. He looked like a real person. He was there one moment, but gone the next. If he was a real person, he would’ve had to walk past her.

The entity of an Indian Woman, with spirit children; (perhaps the spirits of the dead babies or her own kids) Talked to psychic medium Robin Alexis during the PIHA investigation. This pleasant, friendly female entity called herself, Grouse Woman, and told Robin that she had died in a fire.

Strong emotional energy of grief and regret is very much apparent; some of it is residual, some of it comes from mourning entities. Entity of love-sick Father Patrick, full of guilt and in need of forgiveness:

This unhappy spirit confessed his misdeeds to psychic medium Robin Alexis  He failed his vow of chastity, by falling in love with one of the prostitutes, made her pregnant, and then having to minister the last rites to the still-born infant.

After this happened, Father Patrick didn’t feel his services for either live and dead infants were any good because of his own sin. Plus, the prostitute he loved either died with her baby, or left him. He continued to long for her.

Psychic Robin Alexis also was overcome by the feeling of great sorrow of the prostitutes who lost their still-born or premature babies, and having to see their little bodies buried in the basement dirt.

Many guests and staff, especially the manager/housekeeper, have all had personal experiences with the friendly spirits. Within The Palace Hotel’s “Ghost Files,” many of these experiences have been shared on paper.

Psychic medium investigator, Robin Alexis, who has a radio talk show and a Web site on psychic phenomenon, came along with these investigators and was able to connect with some of the spirits, while the PIHA were able to capture hard evidence, including EVPs, etc., that back up conversations Alexis had with the spirits. Fascinating stuff!